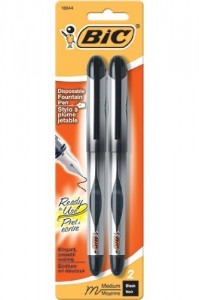 Fountain pens don’t have to be a lot of investment, and there is often no guarantee that the hundreds of dollars you might spend on an expensive pen will translate to the workability required by you. At the end of the day, a pen is simply to write with, and the following selection provide convenience and durability in combination with cheapness.

The cheapest pen on this list, this is a disposable and extremely reliable pen. Most pilot pen brand fans agree that you can all but run a lorry over them before they stop writing, so this is not the kind of pen to let you down when you need it most.

Two in this pack, this is also a disposable pen for use on the go. No need to mess about with ink and refills – write and chuck away. You get the feel of the fountain ink pen along with the convenience of a regular BIC ballpoint.

This is not a disposable pen, but it is one of the cheapest pens on the list. It’s very light and slightly less luxurious looking, the pen can be refilled and reused until it wears out or you lose it. If you’re the kind of person who is forever losing pens, but wants to use a fountain pen, a couple of these will fit the bill without doing too much damage to your bank balance.

Although this is a middle order pen on the list, it neither looks nor feels that way. At its price, it is probably the most impressive bargain of the lot. Not only is the pen reusable, it looks and feels extremely elegant, with a marble finish cover that is absolutely beautiful. Prepare to be complimented over and over for the prettiness of this charming instrument, nobody ever need know it was one of the cheapest fountain pens.

A smooth writer with a heavy and sturdy feel, this pen is both stylish looking as well as a hard worker. One of the pricier numbers on the list, it is worth it for the look of the pen. It looks like a much higher end pen even though it may work at a level less than expensive pens.

This sexy black pen with a plastic barrel is another slightly pricier option, but it is worth the cash. Durable, long lasting and smooth, its iridium nib will leave you with no complaints. Not only that, but it is packaged with a converter and extra cartridges, which make it great value for the money. Although the plastic used in its manufacture makes it feel slightly cheap, but it is worthwhile for its abilities as a pen.

The most expensive pen on this list, I included it simply because the sheer quality of the brand coupled with its look make it value for money, even at the price point. This Sheaffer pen is modern and the eye-catching, far from traditional orange color looks quirky and great. The metal barrel makes it feel solid while still being a lightweight pen. Since it writes excellently as well it is definitely a great purchase in all respects.